Our Lady of Perpetual Help

Perhaps the first thing to notice about devotion to Our Lady of Perpetual Help is that the icon is not so much something that is physically venerated, but something that engenders a connection to the person of Mary herself and to the mysteries of salvation in which she played a part.

If you visit the international shrine of Our Lady of Perpetual Help
in Rome, you will not find people lining up to touch the picture. Nor
will you find that happening at the gigantic shrine in her honour at
Baclaran, Manila in the Phillipines, or the warm Novena Church on
Thomson Road in Singapore. At these latter shrines, thousands upon
thousands come each week, but they come as a community to pray, not as
individuals to touch.

These people come as a community bringing the heartaches of the world and leave as a community restored in hope. That is the purpose of an icon; it is like a door. Doors are not there to stand and look at, or even to touch for the sake of touching. They are there as a portal, as a way through. And so with an icon, it is a portal, a way through to another and larger world, the world of resurrection and justice where all things are being restored in Christ, where all is being gathered unto God through the energy of the Holy Spirit. 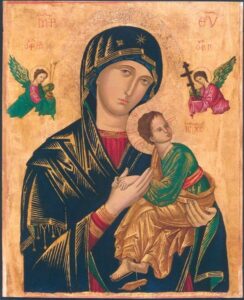 It is usual for an iconographer to paint to express rather than to impress. It is usual that he or she would spend months in prayer before starting an icon. Their prayer would continue throughout the work. Their aim is not to give a realistic impression of Jesus and Mary and the mysteries they reveal to us. Rather, the iconographer’s aim is to paint an icon that will of itself beckon you in, as it were, and take you through to another level, open up another world, the world of God’s ineffable glory and transcendent presence.

It is not their aim to literally show the beauty of God or Mary. Their aim is to reveal that beauty indirectly through the icon. So, in the icon of Our Lady of Perpetual Help, it is Mary herself that fills the picture. She looks at you as if addressing you. She looks not at Jesus, not at the angels on either side, nor at heaven above. She looks at you, personally! Through the icon, her eyes draw you in.

Mary is clearly an important woman. She is set on a gold background, a symbol of heaven in the Middle Ages. She is dressed in dark blue robes with a green lining and a red tunic. Blue, green and red were royal colours. Mary is dressed as an empress. The eight-point star on her forehead was probably added by a later artist to represent the Eastern insight that Mary is the star that leads us to Jesus.

The Greek letters above her head proclaim her to be the Mother of God. The image so far is revealing Mary’s power to intercede and to accompany us in prayer. In Byzantine art, Mary is never shown without Jesus who is central to our faith. And here Jesus is also dressed as an emperor, for only the emperor could wear the green tunic, red sash and gold brocade shown in the icon. The Greek letters near the child’s head proclaim that he is ‘Jesus Christ’.

Jesus is not looking at Mary or at us or at the angels. Though he is holding on to his mother, he is looking away at something we can’t see, something that made him run so quickly to his mother that one of his sandals is falling off. What would have frightened him so?

The icon is not asking us to get marooned upon the sufferings of Jesus; it is rather inviting us into the mystery of salvation that reveals God’s everlasting love. The icon reveals that Mary accompanied Jesus to his moment of integrity; the moment when he chose not to let anything come between himself and any other person, divine or human. That moment climaxed in his Gethsemane, his suffering, and his cross; it burst upon the world in the glory of his resurrection. The icon pulls us into the restoring and loving integrity of the risen Christ still poured out upon us in the Holy Spirit.

The icon invites us to run to Mary in any of life’s troubles. People come to Mary not so she can cling to us, but so that her open hands might accompany us to an open life. Over time, an open life will bring us to our own integrity before God and the world. Such is the grace of it! That is why people come in their thousands bringing with them the heartaches of the world. That is why they leave as a community restored in hope. The world’s little ones, in their response to the icon, proclaim as one that Mary is indeed perpetual help.