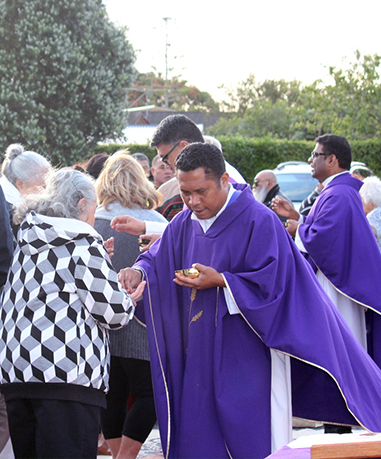 Redemptorists have been present in the lives of the people of New Zealand for over 130 years. Australian Redemptorists began travelling to New Zealand to preach summer missions beginning in 1883. The success of these missions, and the connections they made with the communities they served, led to the acquisition of a property on Wellington’s Mount Victoria. This was to be the site of the first Redemptorist community to permanently settle in New Zealand.

Today the Redemptorists continue to accompany and journey with the people of New Zealand. The Redemptorists currently serve three parishes in Auckland New Zealand; St Anthony’s Parish, St Thérèse’s Parish (known as the Mangere Catholic Parishes.) and St Pius X in Glen Innes. All parishes have a significant community of Samoan and Tongan parishioners who bring distinct cultural traditions to these vibrant parishes.

For over a decade the Redemptorists have been serving the Syro – Malabar Community in New Zealand, celebrating of Mass and participating in faith formation programs. There are three hundred families in Auckland with 214 students attending catechism classes every Sunday. This community is divided into six family units according to where people live.

Every month we gather for prayer hosted by a local family. Our time spent in prayer and community helps us get to know each other and grow in faith. In Auckland, we serve the Parish of the Immaculate Conception in Ellerslie. We preside over two Sunday masses and a Friday evening mass.

Our commitment to the Syro – Malabar Community also extends to Palmerston North where two Redemptorist priests are present for the spiritual needs of the community.