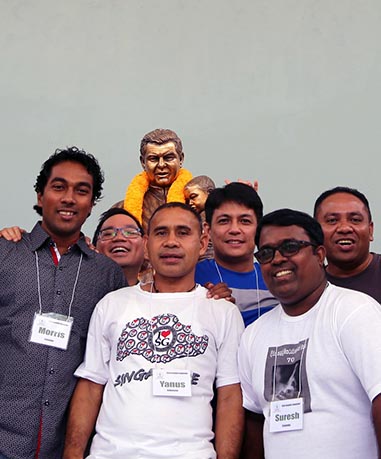 As a young boy, I was intrigued by the men who would come periodically to my home town. They would have us sitting on the edge of our seats with their vibrant preaching. They were the Redemptorists, and they frequently came through the country areas where I lived.

In 2004, I was ordained a Redemptorist priest in my home parish of St Patrick’s, Gympie, Qld.  Cairns Bishop James Foley, a former parish priest of Gympie, was the ordaining bishop.  It was a celebration for parish, family and friends, and of course the Redemptorists.

I chose an artistic representation of Jesus washing his disciple’s feet for the memento card of my ordination. For me the ‘washing of the feet’ is a reminder of my vocation to serve.

I recall the bishop’s words at my ordination. “Ordination is a brave step”, he said. “It goes against the mood and culture of our times. At its best priesthood has always been counter-cultural.” The bishop went on to say that the Redemptorists “have a fine tradition of good preaching and the sensitive care of souls.”
. 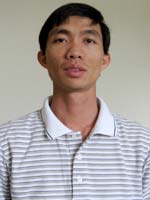 In my experience, the Redemptorist Congregation is like a big family.  It transcends regions, countries, languages, customs and cultures. I feel at home where ever I am in the Congregation.

I grew up in Vietnam and that is where I joined the Redemptorists. When I transferred to the Australian province it was a big change.  But from the first day I felt I was still part of the religious family that I knew in Vietnam. I remember the warm welcome I received when I came to Australia and took up residence with my confreres in the Kew community, Melbourne. I’ve felt similar warmth in the other Australian communities. It seems to me religious life is a preview of the whole imperfect human family sitting down with God.

There are a variety of ways to consider the meaning of a vocation.  In my case, I reflect on the grace God gave me in bringing me to religious life in a missionary congregation. I know there is a call from inside my person; it is to do with God’s relationship with me.  I know there is a call from outside, the call of the poor and the forgotten. Somehow these two calls have coalesced and brought me to the Redemptorists.

It was near the end of my secondary schooling that I first felt the call to join the Congregation of the Most Holy Redeemer. To this day I do not fully understand how it happened. Yet, through the joys and struggles of religious life, the call is still with me. I know it as an invitation from God in his poor.

I don’t know where the call is leading me, but I strongly believe God is with me, and I know my confreres are accompanying me.  In the end it is about our mission to those on society’s margins. In their lives and mine God is bringing all good things to completion. 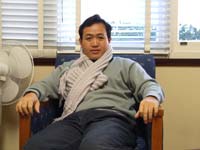 I grew up in Vietnam where, at the age of 28, I was professed into the Congregation of the Most Holy Redeemer. Three years later, in 2007, I transferred to the Australian Redemptorists. As I continue my studies as a foreign student in Melbourne, I rub shoulders with fellow foreign students at the TAFE where I study English.

I notice their struggle to adapt to their new circumstances as temporary residents or permanent citizens.  I have a feel for that struggle because it is also mine. Starting-over in a new culture has stretched my imagination, my perseverance, my life-skills, even my faith.

In Vietnam I had seen considerable poverty. I’ve become aware that in Australia poverty is more veiled.  When I see foreign students I recognise their disorientation and I feel for them. They are away from family, culture, religion and familiar things.  The relationships and gestures that gave them identity are missing. They are deprived.  This is their poverty. I partly share it.

Perhaps to relieve their loneliness, or to fit in, a few foreign students get involved in drug-taking and binge-drinking. Without meaning to, they can quickly slip into the seedier side of life. A few again resort to criminality.  It is their effort to belong, even if it is belonging to a gang.

As I settle into this new culture it is my desire to find ways of accompanying foreign students. Redemptorists seek out those on society’s edges, and I’m feeling called to make life-giving connections with foreign students who are at the edges.

While they get on their feet, I hope they may find in me and my community a second family. I would like them to find among us a place for spontaneous fun, a place to share music and meals, and a place that acknowledges their religion, culture and true worth.

I was a stranger and you gave me welcome