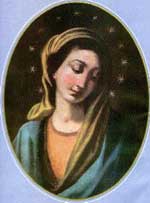 Alphonsus was a Neapolitan. He grew up and lived in the warm expressive culture of southern Italy, and so his spirituality reflected both himself and his culture. He had a very deep devotion to Mary, the mother of Jesus. It was with him from his earliest years and throughout his life he proclaimed the glories of Mary.

Early in his life, his devotion to Mary was more expressive than later on. In later years, Alphonsus, like Mary herself, as we are told in St Luke’s Gospel, pondered quietly in his heart her significance and what it meant to humanity.

Alphonsus saw Mary as the one who opened up the way for the Christ of God. He also saw her as the one who joins us in drawing on the new life of resurrection Christ pours out on humanity.

At the age of 27, Alphonsus painted a Madonna that has come to be known as The Madonna of St Alphonsus.

Surrounded by the twelve stars of the Apocalypse, Mary’s fine and intensely spiritual face transcends ordinary art. None of Raphael’s Virgins inspires one with such longing for silence and prayer.

Alphonsus always considered August 29, 1723 to be the day of his awakening. After a particular visit to the Hospital of the Incurables, he saw the world in a new light and went to the little Church of Our Lady of Ransom, left his sword at the altar, and committed his life to God and the Mother of Jesus. It was somewhat prophetic that Alphonsus made this gesture at this particular shrine, for Our Lady of Ransom was the image of liberty brought by Christians of the thirteenth century to ransom slaves from captivity. One can segue from this image to the Redemptorist motto: “with God there is plentiful redemption”.

Alphonsus often visited a grotto in Scala which was for him a place of retreat and quiet prayer. He referred to the image of Mary there as Our Lady of the Grotto.

On his desk, Alphonsus kept an image of Our Lady of Good Counsel. This particular image, based on an Albanian icon, was quite popular around Naples. The original picture was kept at Genazzano, between Rome and Naples.

As the perpetual help of God’s people in Christ.

– Constitutions of the Redemptorists, No. 32