The first house of the newly arrived Redemptorists was in Singleton, New South Wales,Australia. During their first five years, they did good work in the parish, and at the same time, began an extremely busy programme of missions.

They learned quickly about the Australian climate. So, from 1883, during the summer months, they conducted missions in the cooler climate of New Zealand’s Dioceses.

Knowing Singleton to be an unsuitable base for their full mission programme, the first community oversaw the building of their new monastery at Mount St Alphonsus, Waratah, in Newcastle. It was opened on the founder’s feast, 1887, five years after the Redemptorists settled in Australia. 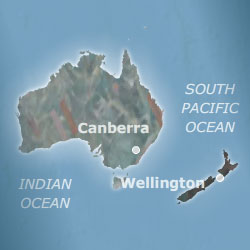 In the first year at Waratah the community conducted 45 missions in ten dioceses through New South Wales, Victoria and South Australia.

A new house in Ballarat followed in 1888, serving as a base for missions in the southern states. In time, work began on a new monastery in the Ballarat suburb of Wendouree. It was officially opened in September 1893. From the outset, Ballarat proved to be a very busy house. In 1894, no fewer than 73 missions were given, with 365 converts joyfully received into the Church.

With the south now being cared for by the Ballarat community, the Waratah community could now look north to Queensland. In 1889, the first missions were preached in Queensland. Missions began in Brisbane and its surrounds, with their success convincing the Archbishop to extend the programme to the far flung country parishes.

By 1894, the Australian Redemptorists had been placed on a solid foundation. Since their arrival in Singleton 12 years earlier, they had conducted 706 missions, labouring in every diocese of Australia from Cooktown to Adelaide and in all parts of New Zealand.

In 1898, Redemptorist numbers had increased to enable a community to settle permanently in New Zealand. A property was acquired on Wellington’s Mount Victoria, facing across the heart of the city. For over 80 years, the Redemptorists worked from St Gerard’s Monastery.

It wasn’t long until the Bishop of Perth wanted the Redemptorists in his diocese. In October 1898, a mission was conducted in the cathedral for one month. It created a sensation in the city. A stream of requests for missions in all parts of the state began to roll in. In 1902, work began on the construction of a monastery in North Perth, and in September 1903, the work was completed and the monastery was blessed and opened.

To cater for increasing numbers of vocations, in 1917, a junior seminary was established in Galong, in rural New South Wales. It was built on a large property bequeathed to the Redemptorists in the will of the Ryan’s, an early pioneering family in the district.

In 1918, Brisbane’s Archbishop James Duhig, invited the Redemptorists to the archdiocese. A suitable site was found in Oxford Park, and in July 1920, the Redemptorists moved into their new monastery. It was a busy house from which missions were given right across Queensland.

A Novitiate and House of Studies were built in Pennant Hills, New South Wales, in 1924 to cater for the increased numbers of men wanting to join the Redemptorists. The Novitiate later moved to Galong, also in New South Wales. In 1935 a second Victorian house was opened at Kew, Melbourne.

A new house was created in Christchurch, New Zealand in 1945, followed by other foundations in Auckland and Dunedin

The years after the war were a time of rapid expansion. As well as ongoing participation in the development of the vice-provinces in the Philippines and in Singapore/Malaysia, further houses were opened in Australia in Newtown in Tasmania and Townsville and Miami in Queensland. There were new communities established in New South Wales – at Concord, Campbell’s Hill, Fairfield West, Penrith and Yagoona. In Victoria, there were communities at Balwyn Box Hill, Brighton, Wongarra and Yarraville.

Missionary activity continues to flourish across Australia. Through parish missions, preaching, retreats, adult education, teaching in universities, social justice work, counselling, accompaniment of indigenous communities, chaplaincies, devotions to Our Lady of Perpetual Help, working with people on the margins of society and promoting the family through the Majellan magazine, Redemptorists have sought to highlight that people matter greatly to God.

OUR HISTORY
Scroll to top